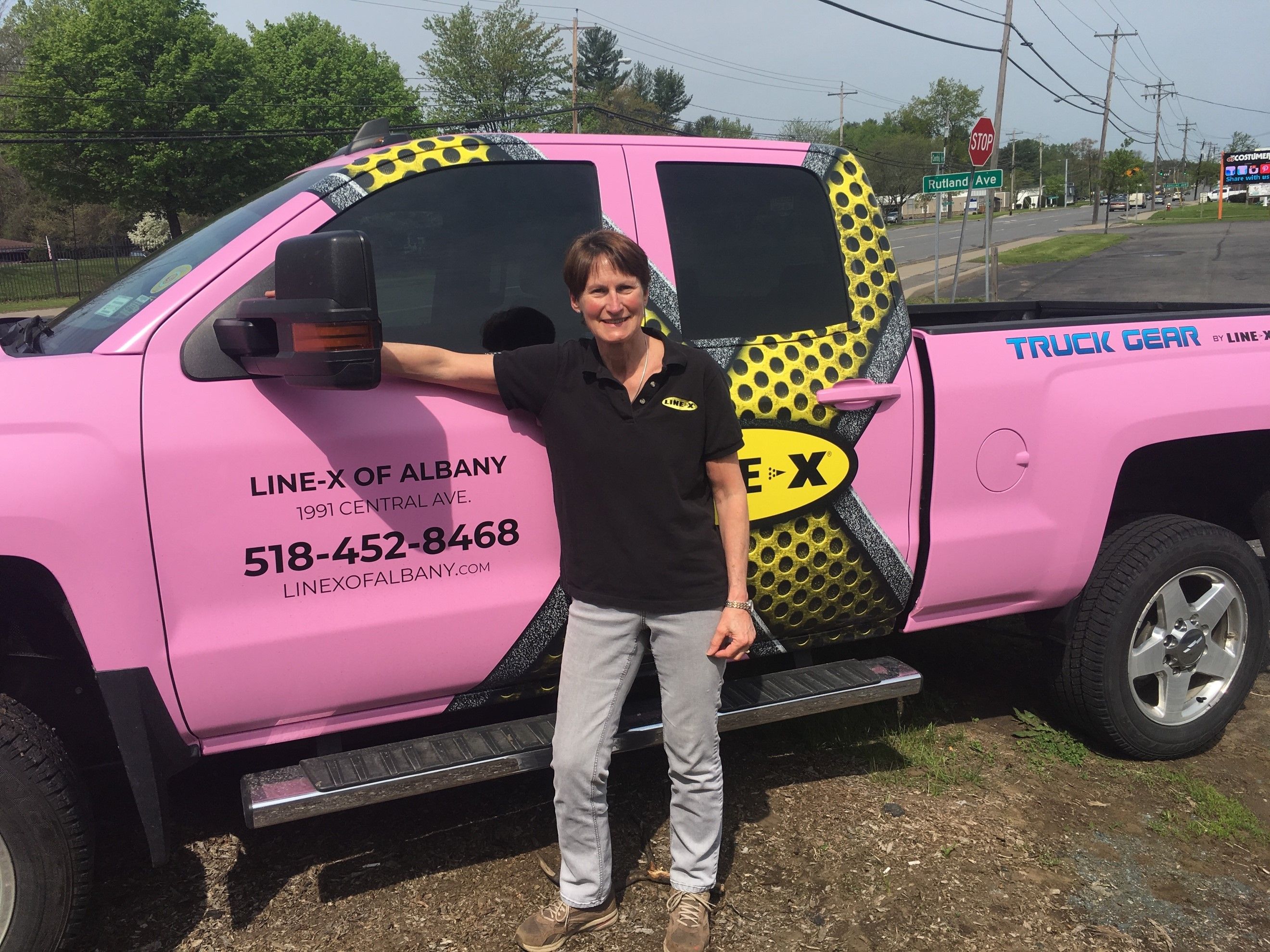 For many, the sight of pink ribbons, pink gear and even pink trucks mean it’s October, a month where we raise money and awareness for breast cancer testing and research, and then go right back to our lives, often forgetting about this terrible disease for the next 11 months of the year. Not for Marilyn Otto, newest owner of LINE-X of Albany, New York franchise. Her big, bold and bad pink LINE-X 2015 Chevy Silverado LTZ boasts a LINE-X PREMIUM bedliner, leveling kit, nerf bars and a gorgeous pink vinyl wrap, and it’s used to support breast cancer fighters and survivors year-round.

“I’m five years from diagnosis and consider myself one of the lucky ones,” says Marilyn Otto, who joined her son's business at Albany’s Capital Tint & Graphics LLC a year and a half ago, expanding to a LINE-X franchise in January of this year. After a series of aggressive chemo and radiation treatments, Marilyn has been in remission for almost five years.

“We chose pink for multiple reasons,” says Marilyn’s son and LINE-X of Albany co-owner Ben Cramer. “Pink stands out, shows the fact that the shop also does custom decals and wraps in addition to LINE-X, and raises awareness for breast cancer. We also want to highlight the fact that LINE-X of Albany is a female-owned small business, and we want to make women feel less intimidated to come into the shop.”

The Chevy Silverado was completed in April, and in its short lifetime has already done the rounds at several local events. The truck made an appearance at the Wildwood Jeep Invasion and Wildwood Truck Invasion in Wildwood, New Jersey on June 23-24. Marilyn and Ben will also be attending the 23rd Annual PA Jeeps All Brands Jeep Show in York, Pennsylvania July 21-22, and several local fairs this summer.

In addition to attending local events, Marilyn and Ben work with several other local charities, including the Nancy Clemente fund, which offers holistic treatments to breast cancer like massages and reiki, Velvet's Totes for Hope which provides a tote with items that make the patient more comfortable on treatment day, and Visions of Strength at Hildegard Medicus Cancer Center which will receive a free LINE-X spray-on bedliner as part of the charity’s annual silent auction.

“My mother chooses the charities we support,” says Ben. “She always veers toward local charities over national ones, because she likes to see the money impact people in our community.”

Of course, the Silverado will also be busy this October for Breast Cancer Awareness Month, but what we love the most about Marilyn’s truck is that it’s not limited to helping out one month alone. We’re incredibly proud to be doing business with you, Marilyn and Ben!