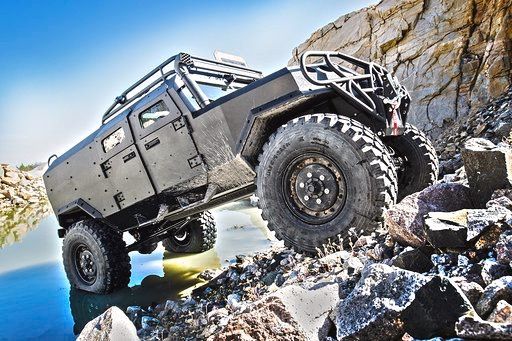 HUNTSVILLE, Ala., (Nov. 5, 2019) – LINE-X, a global leader in protective coatings, renowned spray-on bedliners and first-rate truck accessories, will put on display two remarkable vehicles that feature custom protective-coating applications from two of LINE-X’s premier franchises at this year's Specialty Equipment Market Association (SEMA) Show on Nov. 5-8 at the Las Vegas Convention Center along Convention Center Drive near the south hall in booths# V-457 and V-458. These two vehicles were selected from several vehicles submitted by franchises as part of a special SEMA contest. Twelve finalists were placed in two groups as part of two different contests that allowed LINE-X fans to vote for their favorite vehicle on social media, while LINE-X franchisees voted for their favorite in a separate contest.

LINE-X fans on social media spoke loud and clear. Although all submissions were incredible representations of the LINE-X franchise network, fans overwhelmingly voted for the ‘Lucky Gunner Garage PSV,’ a custom off-road all-terrain vehicle built by Lucky Gunner Garage and sprayed by LINE-X of Western Maine.

"I spent a lot of time serving in Iraq and Afghanistan as a .50-caliber machine gun operator for the United States Marine Corps, so I know a tough vehicle when I see one," said Gus Johnson, owner of Lucky Gunner Garage. "When we set out to build this robust vehicle, we knew only one protective coating was up to the task of being as tough as our armor-plated PSV, and that's LINE-X. We're proud LINE-X is a part of our build and we look forward to having the vehicle on display at SEMA this year.”

LINE-X of Western Maine assistant manager Shawn Morse was excited to work with Gus and the crew at Lucky Gunner Garage. "We were honored to be involved in the project more than anything. We wanted to get the word out about LINE-X and were extremely excited to be working with Gus and his team," said Morse. "This was a huge project and once selected by Gus to spray the PSV, it showed our customers and fans that no job is too big or too small for us.”

The voting was close for the vehicle selected by the LINE-X franchise network but in the end, the most votes were cast for a 2015 Jeep Wrangler dubbed ‘Camo Jeep’ and built by Keith Camacho of LINE-X of Orange County NY. Camo Jeep features a three-color full LINE-X PREMIUM exterior coating and several stylish accessories to give this Wrangler a one-of-a-kind look.

Build details on the 2015 Jeep Wrangler JK include:

“It is a huge honor to bring the Camo Jeep to SEMA and have it displayed among all those incredible vehicles,” said Camacho. “I think I can speak for all LINE-X franchises by saying that we take incredible pride in our work and to have that work highlighted on a stage like SEMA really makes all worth it. It’s also an honor to represent our fellow franchises at the show as well.”

Dennis Weese, LINE-X president, reviewed the submissions as well and was thrilled to see the quality of work by the franchises and is excited to bring the winners to SEMA.

“I couldn’t be more impressed with the level of custom work our franchises are doing for their customers, and it is an honor to bring two really amazing vehicles to SEMA to show off the creativity and workmanship of our franchises,” said Dennis Weese, president of LINE-X. "We are proud to have the opportunity to share the dedication of our extensive franchise network and with the help of LINE-X fans from our social channels and the franchise network itself, we were able to bring two incredible vehicles to represent LINE-X at this year’s show."