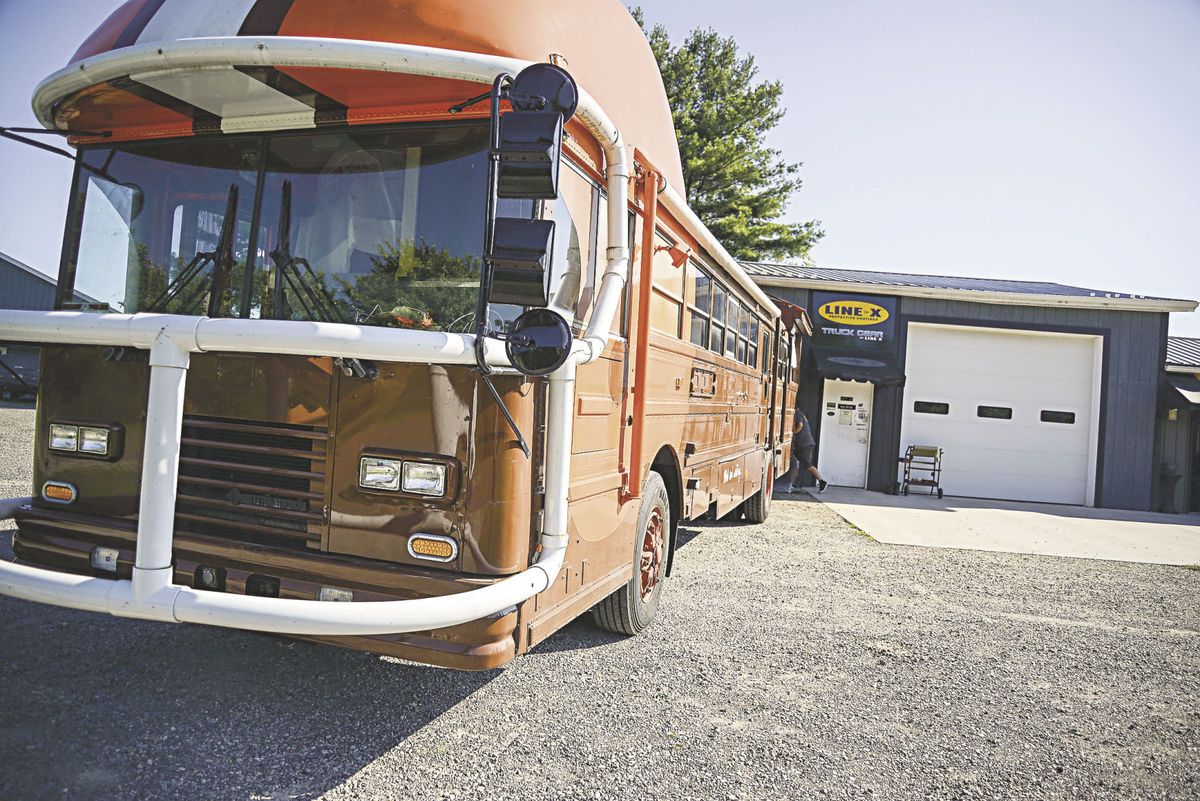 SUMMERHILL TOWNSHIP — "You can spray Line-X on anything," said Ed Perrye, the 13-year owner of Line-X of Crawford County. Perrye is confident in part because the protective coating business near Conneautville recently tested that statement with its latest project — transforming a place for chattering kids into absolute nirvana for cheering football fans.

Chris Wenz drove his yet-unnamed but unmistakably Cleveland Brown-affiliated bus all the way from his home west of Cleveland to Perrye's business because he "always wanted the floor of his bus to look like a football field." Apparently having a giant helmet on the front and a dog house on the back just wasn't adequate for the tailgating party on wheels.

"I've always been a Browns fan," Wenz said. "I wanted my tailgating bus to look like one in the movie "Draft Day."

"Draft Day" is a 2014 American sports drama film starring Kevin Costner. The film is a story about the general manager of the Cleveland Browns (Costner) deciding what to do when his team acquires the first draft pick in the upcoming NFL Draft.

Wenz purchased the bus in 2008 and the renovations began. "I had a new motor put in," Wenz said. The bus also includes big screen televisions, including one that pulls out from under an awning, a three-keg cooler with taps inside and out, a bathroom and a sound system that's "better than what they have at a concert," according to Wenz.

"It doesn't matter how the team plays," Wenz said. "You can never beat our tailgating."

The bus typically hauls about 25 devoted fans of football and/or partying not just to the Browns' home games at FirstEnergy Stadium. "We've taken the bus to Tampa, Green Bay and this year we're going to Washington," Wenz said. "Me and two of my buddies share the driving."

So he's a Browns fan with a vision of the perfect party bus, right. We all got that part. But how did he find Line-X in rural Crawford County? "My buddy told me about Line-X," Wenz admitted.

It turns out, another Browns fan who owns his version of tailgating perfection, called the "Kennel II," had Line-X create a football-field-floor on his bus before Wenz did.

Larry Laurello, also an Ohio native, found out about Line-X when he bought a Chevrolet 2500 pickup truck from a car dealer in Ohio back in February. "The car dealer sent my truck to Line-X to have the bed coated," Laurello said. "I got my truck back and the coating was so impressive and indestructible that I called Line-X to see if they could do the same thing in green for the floor of my bus." Not only did Perrye assure Laurello that they could coat the floor of his bus in any color, they gave the floor the full-football-field-effect by including the yard lines.

Laurello has owned the "Kennel II" tailgating bus for about three years. It replaced a 10-year-old "Kennel I" that rusted out underneath.

"You have to understand, in Cleveland, tailgating is more important than the game," Laurello said. "We love football and we support the team, but the game is an excuse to get together and tailgate."

Laurello was sure to point out that there is no comparison between Cleveland and Pittsburgh when it comes to tailgating. "Pittsburgh just doesn't have the room in their parking lots for anything similar," Laurello said. It turns out Wenz and Laurello aren't the only two decked-out school bus owners who frequent the Browns' parking lot on game days. "There's a pretty big gathering in the parking lot," he said. "It's all about a big get together, win or lose."

Laurello also found it somewhat amusing that the Steelers used to brag about "The Bus," the nickname for former Steeler Jerome Bettis, but they don't have room for a bus. "Maybe the Steelers could have a boat," he said.

While it's not every day Perrye has a request for a football field on the floor of a bus, he has sprayed the protective coating on much more than truck beds. "We've sprayed bridges, barbecue grills, camper roofs, boats, commercial floors and lots of other surfaces," Perrye said. "It's extremely tough and durable." So tough that on the Line-X Facebook page there are posts that show a photo of a blast-tested, impact-resistant phone case and Line-X coating sprayed on the walls of the Pentagon in case of a bombing.

Perrye confirmed the use of Line-X at the Pentagon and added that the coating is being used as part of a roofing project to keep houses from being destroyed in hurricanes.

Wenz and Laurello may be tailgating buddies and Browns fans till the end, but there may some competition for the ultimate tailgating bus. "The green astro-turf-looking floor has to look like a football field," Wenz said. "We have to add the yard lines," Perrye said. "That'll have to be done by hand."

Both bus owners may now sport virtually indestructible football field floors inside their buses, but Laurello recently added spinners that look like dog bones to his wheels. Wenz wasn't about to let the cat out of the bag, or the dog out of the house, when it comes to any future upgrades.

During our conversation, Wenz was anxious to see the finished project and get his bus back home so he could put all the furnishings back in time for preseason games. If Wenz and his friends don't travel to Wisconsin, there's still plenty of fun to be had just watching from home. The Browns kick off the preseason on Friday against the Green Bay Packers at Lambeau Field.